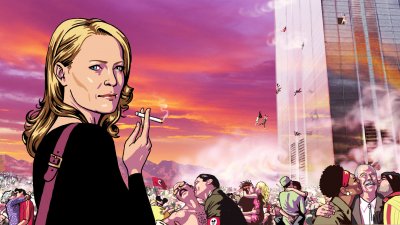 The Congress is a one of a kind movie, directed by Ari Folman, the same genius who brought us Waltz with Bashir. I personally really enjoyed it even though I found it a bit messy at times.

The story evolves around Robin Wright, the famous actress we all know and who is playing here, her own self. Obviously, even though, she is playing herself, this movie only borrows facts from her life, it is not autobiographical...at all. Of course, Robin Wright is getting older and is not anymore, the young & innocent actress we remember from The Princess Bride. Apart from these small facts, the story does not match Robin Wright's life. In this parallel world, she is an aging actress on the way of being forgotten, who is getting less and less movie offers, and who needs to take care of a sick little boy at home. Feeling powerless against the passing time, she decides to sell her body image to a film studio in order to remain young forever and come back to a more successful movie career. Then, starts an amazing journey in a colourful and unique universe that is shown through animation. But, of course, it is not only flowers and butterflies since, but Robin Wright has also very little control over her young, animated self.

The upside of this animation is that it is limitless since it helps creating a crazy universe with splendid creatures, brilliant scenery... it all seems very magical. On the other hand, I feel like this "other world" is pushed maybe a little bit too far, and it can confuse the spectator.

However, this movie passes quite powerful messages about existentialism, being part of a corporation, being dependent of your body image and most of all, it shows, metaphorically of course, what could be the future of the movie industry.

All in all, even though it has some flaws, I highly recommend The Congress, it leads you to a unique and unforgettable journey, and I think you'll remember this movie for a while.