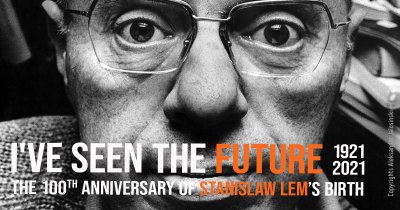 In 2021 we celebrate the 100th birth anniversary of Stanisław Lem – a Polish writer, futurologist and philosopher, whose work ignites the imagination of readers all around the world. Books by Lem (the most frequently translated Polish author) have been published in 45 languages and sold in millions of copies.

Stanislaw Lem was born on September 12, 1921 in Lviv, died on March 27, 2006 in Cracow, Poland. 2021 is the 100th birthday (and 15th death) anniversary of the greatest Polish science fiction writer. The year 2021 is also a special time for us due to the ongoing struggle against the SARS-CoV-2 virus pandemic and the rapidly advancing civilization changes Stanisław Lem was a man of above-average intelligence and an exceptional visionary. In his books written back in the twentieth century, Lem predicted the emergence of many devices that function today, such as audiobooks and e-books. He also wrote extensively on various forms of intelligence, including machines as in the novel The Invincible (1964), and the intelligent ocean in the novel Solaris (1961). Lem also addressed the issues of cultural changes generated by the development of technology, e.g. in the novel Return from the Stars (1961).

To mark his 100th birth anniversary, Ancien Cinéma prepared a review of films based on Lem’s books and an two exhibitions of posters related with his works.